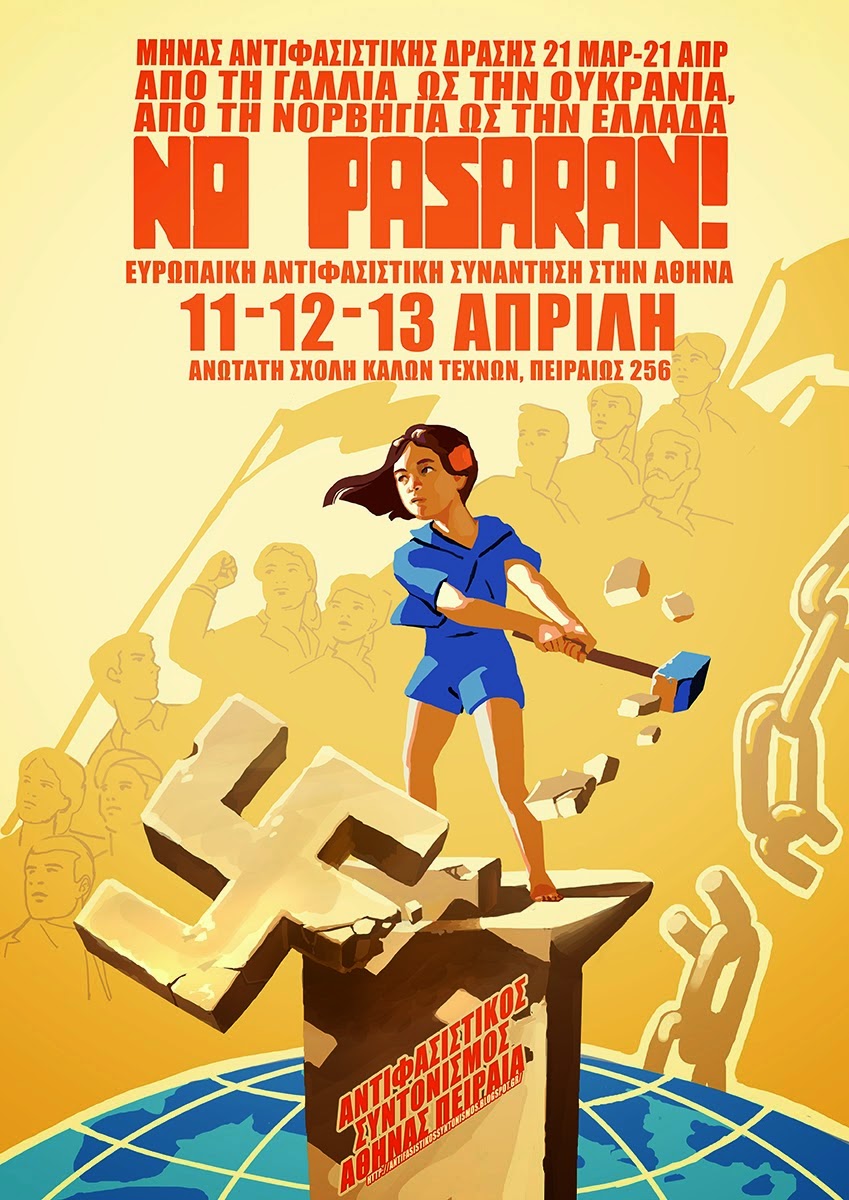 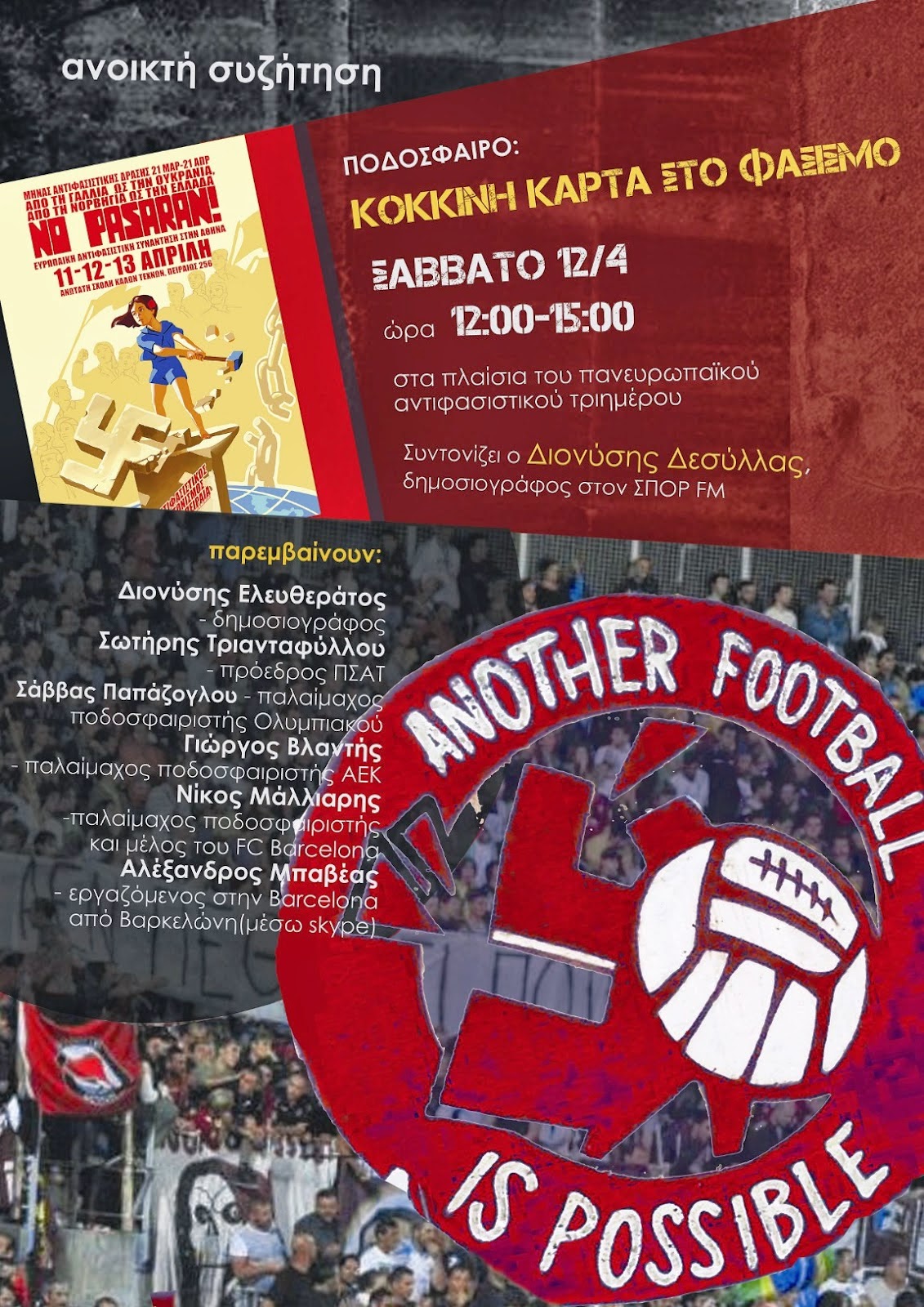 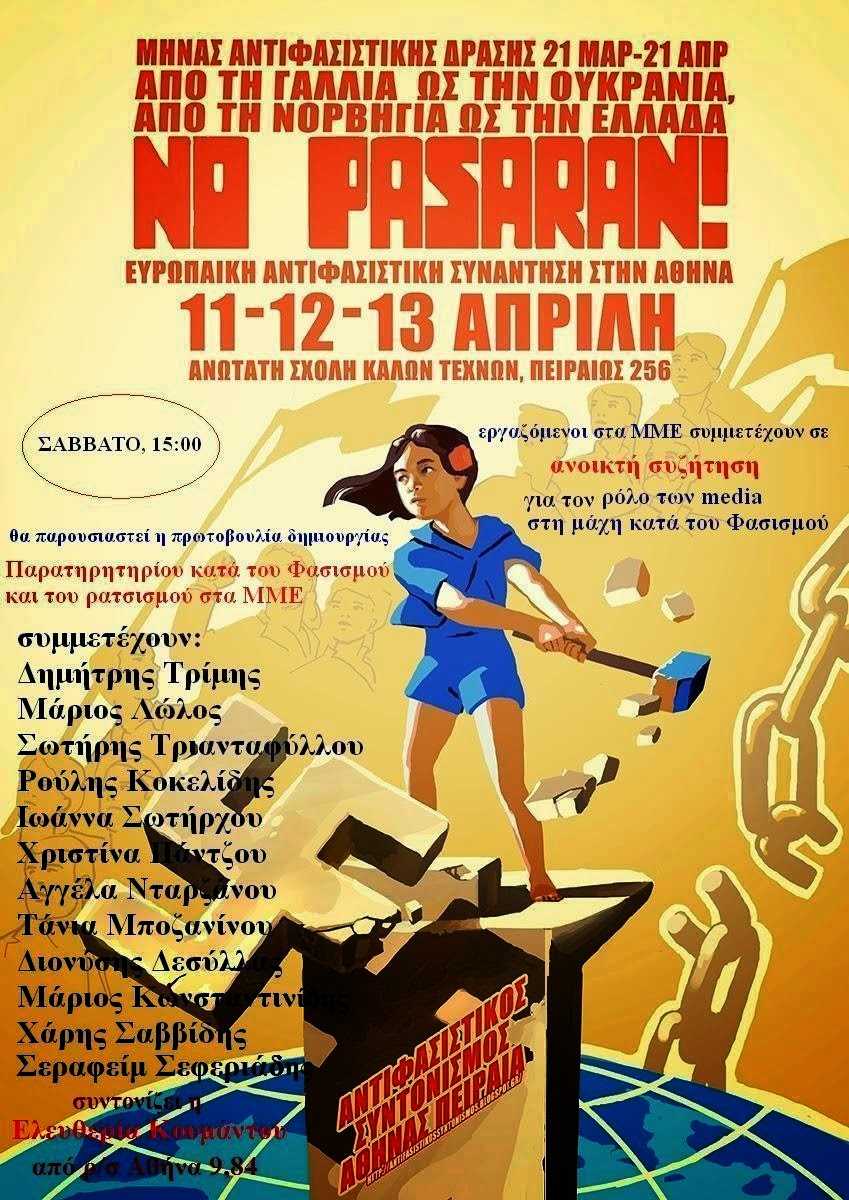 Video for the european antifascist meeting, Athens, 11-12-13 of April (english)

the final programme for the european antifascist meeting, Athens, 11-12-13 of April

FOR A EUROPE FREE OF FASCISM, RACISM AND SEXISM IN A WORLD OF FREEDOM AND SOCIAL SOLIDARITY 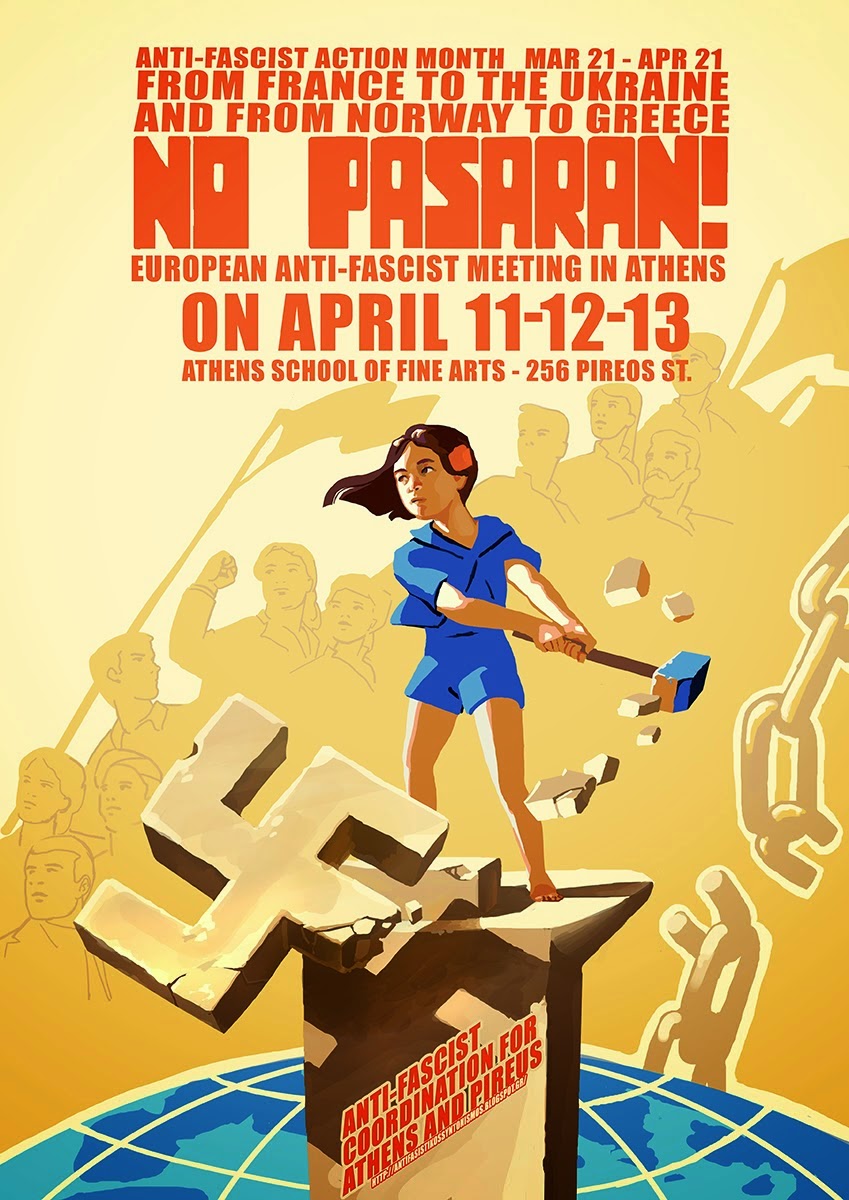 Seventy years after World War II and the defeat of fascism, Europe is facing the challenge of a Nazi, racist far-right on the rise.
Racists and Nazis however definitely have an opponent who keeps growing stronger: the massive and pluralistic movement fighting in the streets all over Europe, not only against fascist terrorism but also against those who sustain it and protect it: anti-grassroots policies, arbitrary police behaviour, neoliberal totalitarianism itself and the system trying to impose it.
On April 11th, 12th and 13th 2014, resistance meets in Athens in a climate of fermentation and festivities that will involve political workshops and speeches, concerts and discussions with antifascist collectivities, networks and assemblies from all over Europe. We will discuss, share our experiences and organise our action at a European level with the view to send out a strong message of coordinated fight against fascism, racism and sexism.
The three-day meeting is the main event in the context of the month of antifascist action (March 21 to April 21) that will involve interventions and events in neighbourhoods, social spaces and schools throughout Greece.

Programme
Friday, April 11th:
18:00 pm: Opening of the assembly: “Antifascist movements in Europe: past experience, ways to move forward through international coordinated action”.
*Carring your mobile phone with tuner, will be helpful to the translations
21:00 pm: Screening of the film “Fascism Inc.” by Aris Hatzistefanou, introduced by Ap. Fotiadis, Infowar team.
22:00 pm: Concert

15:00 – 18:00 pm: Workshops – Zone ΙΙ:
·         Working in the Media: presentation of the observatory against racism and fascism in the Media;
·         Resist sexism, homophobia and transphobia;
·         From Europe-fortress to concentration camps: resistance, self-organization, common struggles;
·         Workers’ movement against fascism;
·         Beyond Europe: the rise of the extreme right in Europe and ways to exit from capitalism.
18:00 pm: Central event: From France to the Ukraine, from Norway to Greece: NO PASARAN
Keynote Speakers: Alain Krivine, member of the Left against Capitalism in France, Joe Higgins, anti-austerity alliance ISP-MP, Tariq Ali, author-director (video message)
Other speakers: Borotba (Ukraine), Pete (Russian Antifascist), Walter Baier (Alter Summit), Mathias Benik (Attac-Hungary), Leo (AFA Paris)
Film Screening
21:00 pm: «Tungsten» (2011) by Giorgos Georgopoulos
Theatre performances
20:00 pm: THE FIRST STOP by [nomaδes artcore]
When you first came across with fascism in your life?
Artists reflect and illustrate memories and images of citizens of Greece and beyond...
22:00 pm: The Eye and the Lens – OLME Theatre group
21:00 pm: Main Concert 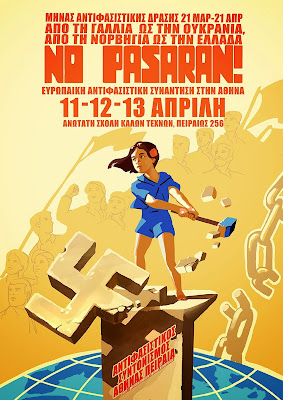